A downloadable game for Windows

This game was the result of a private Game Jam in 2015.

You're running late to a meeting and need the most coffee possible to stay productive.

Get through the turnstile as quickly as possible, but first unlock it by using the wallet in your back pocket.

The security protocols are changing and getting more absurd every day, so it'll get more and more difficult to tap your wallet on the sensor and get to the door on time before you get locked out.

Make it through all 13 meetings and celebrate with a company dance party!

Drink some coffee now if you must to get through everything quicker, but DON'T SPILL YOUR COFFEE!

(An Xbox 360 controller is highly recommended, but Keyboard and Mouse controls are supported)

Left Stick (or WASD): Move around

Right Stick (or Mouse movements): Balance your upper body. As you move forwards/backwards, you need to keep your upper body straight, or else you will fall over!

Left Trigger (or Left Shift): Combine with the movement input to precisely position your butt. You'll need to master this skill in later levels!

I know we've been quiet since being approved for Steam Greenlight, but rest assured we are continuing to work hard on the Supremo Edition of Don't Spill Your Coffee! We've been designing and implementing tons of new mechanics, controls, levels, and more! Now that we have a good idea of the overall scope, story, and new features in the Supremo Edition (plus that we realistically can only work on the game over weekends), we've decided that our original goal of end of Summer was a bit ambitious. We are now aiming for an early 2017 release and we're going to try to post more frequently than we have been.

For now, here's a quick screenshot of one of the break rooms where you can acquire more coffee from a coffee machine if you've spilled too much: Thanks again for the millionth time for your support!

We've been Greenlit on Steam! Thanks so much for your enthusiastic response yet again! We're working hard on the Supremo Edition and will have some surprises to share over the next couple of months. Time for some celebratory coffee!

Hello fellow coffee spillers! Once again, we feel the need to say how excited we are that so many of you have been enjoying our silly little game. We made this over a weekend and thought that maybe a few of our friends would try it out, but never could we have imagined how strong of a response it's been getting! Thank you all so much.

Anyway, we have several exciting updates for you today:

This fixes some of the last lingering technical issues that we've seen in videos or were told about. Specifically:

Next, on to our future plans!

Thanks to your enthusiastic response and support (seriously, you're all amazing), we have begun work on a full-fledged version of our game! We are incredibly proud of what we made when we were constrained to 48 hours of development for a Game Jam, but now we have a chance to really create a solid game through and through. We are calling it Don't Spill Your Coffee! - Supremo Edition. It will be a brand new experience with a multitude of new features and content.

While we are still designing and brainstorming ideas, The Supremo Edition will definitely be including:

We're now up on Greenlight! Vote for us!

We have just now submitted Don't Spill Your Coffee to Steam Greenlight! We need your support to get it on Steam, which will help us out greatly to make the Supremo Edition possible. The Game Jam version will remain up for Pay What You Want on itch.io (and the Supremo Edition will be added as a separate download on itch.io when it's ready), but the Steam version will always be the latest version!

Just click this link and say that you would want to buy this game if it was on Steam!

Lastly, we have come up with our dev name. From now on, the three of us are collectively called Team Meeting Games. It's a terrible pun, but we love those.

Thanks yet again (we can't say it enough!) There are some fun times ahead!


Just a quick update! I think I have found the issue with some people being unable to turn their character, despite all of the other controls working. I'm still looking into what is causing the game to hang for a second the first time the first sensor is activated. I've tried two different approaches, but neither has solved it yet. I'll try to solve it for real for the next version!

Thanks again for all of the interest. We should have some exciting news soon!

First off, thank you all so much for the enthusiastic response to Don't Spill Your Coffee! This is miles beyond the attention we thought we would ever get and we have laughed at so many of the videos everybody is posting. We're now motivated to push out bigger and better releases! But first, some steps had to be taken to stabilize the code beyond Game Jam code quality. There's still a lot of foundational work to be done before more feature-rich updates get pushed out, but I've addressed some of the more jarring issues that I've seen in various videos:

I know this game came out a while ago but wow what a trip that was, I even got a bit frustrated, but I did really like it and I even made a video on it if that's ok. I hope I play more games made by you in the future. Good Luck!

Fun but also difficult for me to play.

this game was so much fun to play, I really enjoyed it.

Very challenging, laughed all the way through.

Thank you for making the game.

I played with controller, and quite enjoyed it! it was hard, but I laughed my ass off!

Really good fun! control scheme can get a little annoying but that's just part of the charm!

I just recently found this game and I am super glad that I have, funniest game ever! Would love to get more but looks like the development has stalled and devs will unlikely ever see this comment. Sad face.

Reply
Rossnator3 years ago
This game is way to funny what ze hell mate.
Reply
Noveto3 years ago

Reply
2for1 GAMERS4 years ago

Ok, it is early and Goz is late for a meeting, but he needs his morning cup of coffee first!

Check our channel out here! :)

Absolutely love this game! So wacky and crazy, with some tantalisingly tricky challenges! Made great content, most fun video i've made in a while!

Please also watch: "I've Become So Fluffy! | Fluffy Defenders" https://www.youtube.com/watch?v=c4pC8...
=================================================================
You're running late to a meeting and need the most coffee possible to stay productive.
Get through the turnstile as quickly as possible, but first unlock it by using the wallet in your back pocket.
The security protocols are changing and getting more absurd every day, so it'll get more and more difficult to tap your wallet on the sensor and get to the door on time before you get locked out.
Make it through all 13 meetings and celebrate with a company dance party!
Drink some coffee now if you must to get through everything quicker, but DON'T SPILL YOUR COFFEE!

Play this game on Itch.io: https://symphonite.itch.io/dont-spill...

Our Normal Schedule: Mon & Fri - Gaming (DARGON Games or Let's Play in the Bedroom)
Tue - Food, Drink, or Product Review ("Vape THIS" & "Eat THIS" with Ecchi Tenshi and DARGON, WitWGARA We Try) [ We try to post by 3pm PST/PDT ]
[We do not normally post on Holidays.]

We have a great starting fan base so far. We appreciate any and all help, be it monetary or telling us what you like or what you would like to see us do more of. We want to bring better content and better quality videos! But that takes money we just don't have, or have access too that is why we need your help! so Thank you for anything you can do to help us!
Please Consider Contributing through Patreon: https://patreon.com/WitWGARA
We use Talentsy! Try it for your channel: https://my.talentsy.com/r/witwgara

Definitely a highlight of my day...God I love butt smashing into buttons.

This game is freaking hilarious! There's nothing like it; we had a good time playing and continued to mess around with it after our recording ^_^

A funny game about carrying cups of coffee around whilst trying not to spill to much.

I made some weird faces in this game... I also turned into a pretzel. So much loling! Great game team. I had a lot of fun with this one. :)

Reply
Hakujou no Sekai4 years ago
Thank you so much developers for creating such very interactive funny game hahaha! I myself enjoyed playing the game while recording. I stop by at level 3 because its hard but i plan to continue my gameplay on it if viewers ask for more episodes on it. Again thank you so much and More power to your team!
Reply
Jed4 years ago

Thanks for making a fun game.

Reply
Tattle Tactics4 years ago
really loved this game and i might play it again, so simple yet beautiful and graceful, the way my guy derped was just... so magnificent.
Reply
KDi4 years ago

This game is really funny and slightly hard (especially when you're not thinking). Totally recommend.

Though it is sad the game has come to an end. I enjoyed playing it despite soaking myself for the video/thumbnail. Thanks for making a fun game.

Frustration to the MAX!!

well I HAD to record more of this haha. This game's been a lot of fun so far!

Really silly and entertaining game you've made here! You've turned something dull and mundane (not spilling a beverage) and turned it into something genuinely fun. Great job!

I Can't even with this! Why does this game have me stuck on twerking at 7:00 am?

Awesome Game! Music is on point. Mechanics are unique. A++

I've been looking for a game that is fun but may make me rage. This is extremely fun and I think more videos I'll eventually rage haha.

Reply
Raithias4 years ago
I found keeping the guy upright to be hard indeed!
Reply
Nutbag4 years ago

Amazing fun, loved it, hated it, looking forward to seeing this one completed, nice work guys keep it up.

Really enjoyed this Game, as rage inducing as it was :P And got to do a little bit of twerking aswell.

Awesome Work on it tho :D

Have you ever needed to know if you walk to work without spilling your coffee beans? Well, this trusty simulator will help you prepare for that clean business shirt

oh this game! so funny but hard at the same time! good job on creating this though! 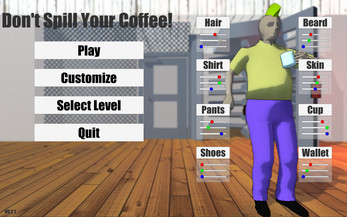 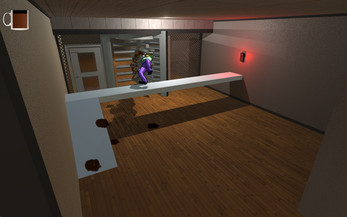 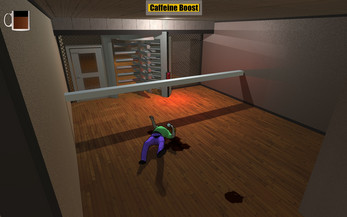 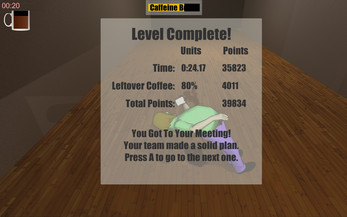